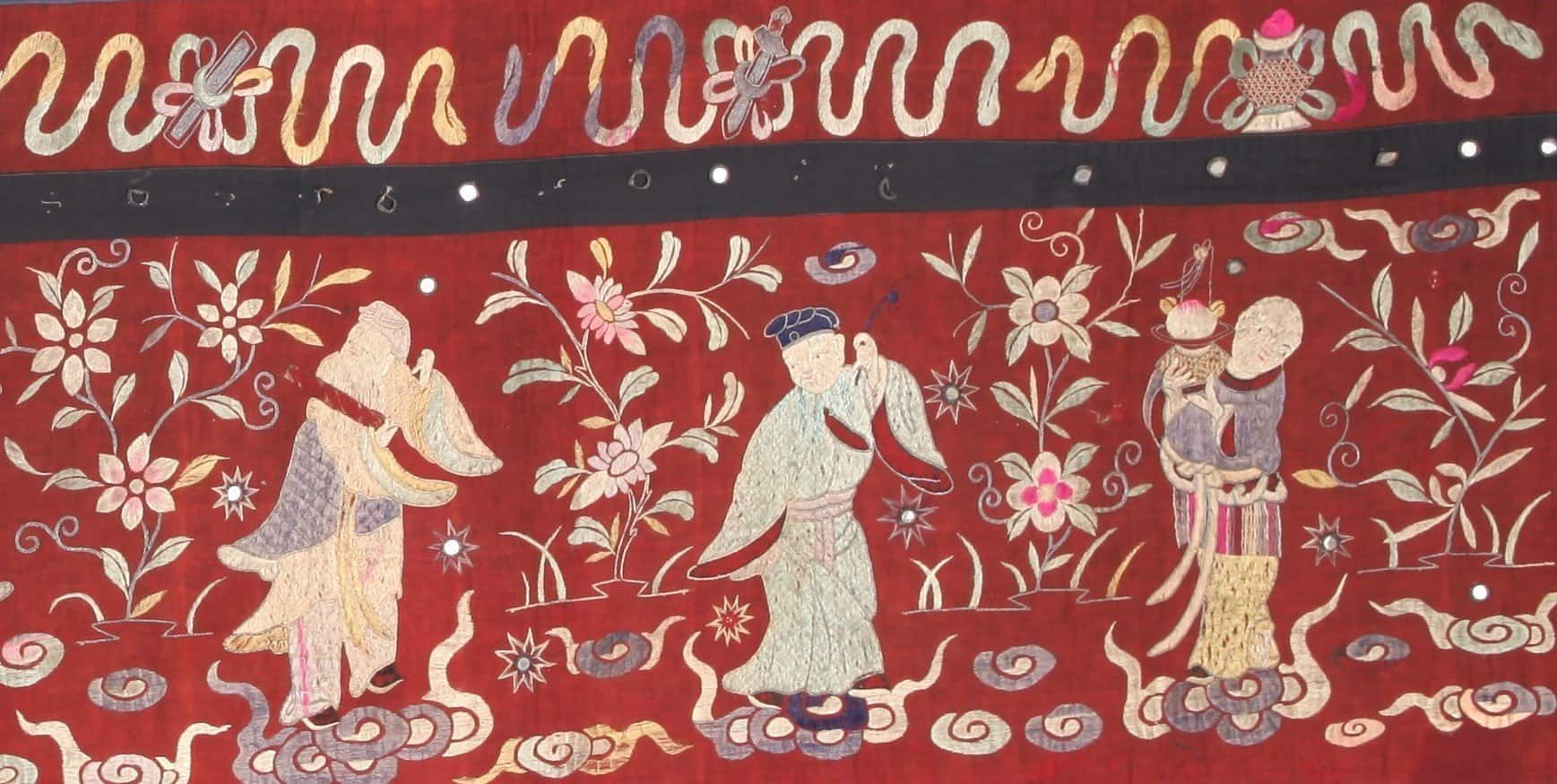 This exquisite wall banner was made in the second half of the 19th century and originates from western Hunan Province. A wealthy family would have commissioned the banner for hanging in the main reception room of their home during spiritual or religious ceremonies. A similar example is housed in the Yuanling Museum in Hunan.

A magnificent work on an ample scale, measuring 4 metres x .88metres, the banner portrays Shou Xing, the demigod of longevity, flanked by the Eight Immortals surrounded by their treasures and a profusion of flowers.

Shou Xing is embroidered here as a balding elderly man, which is the conventional way, while seated atop a red-crowned crane. The flanking Immortals in the left half of the main panel are, from left to right: He Xian Gu elegantly holding a Buddhist lotus flower; Han Xiang Zi playing a jade flute with great concentration; Cao Guo Jiu wearing a beautiful pink coat while holding a jade instrument; Tie Guai Li walking on crutches. The Immortals in the right half of the main panel are, from left to right: Han Zhong Li lifting a treasured fan; Zhang Guo Lao carrying a fish drum; Lu Dong Bin carrying a treasured word on his back and holding a horsetail whisk; Lan Cai He holding a gaily decorated basket in which can be seen the peach of immortality. All nine figures stand on clouds and are surrounded by orchids, chrysanthemums, auspicious plants and clouds and colourful ribbons. Colours vary from character to character, sometimes strong and vivid, sometimes light and simple, yet always chosen carefully to fit each individual. The Immortals not only are venerated in Chinese folk legend but also are seen as each having their own very human foibles and failings. The embroiderer of this banner hints at these weaknesses superbly, showing the wit and warmth of her personality as well as her deep understanding of the legends. The top panel duplicates the treasures of the Immortals, interweaving them with softly colourful ribbons.

Truly a treasure, this wall banner is rich in the symbolism associated both with folk Buddhism and even more markedly the beliefs of Daoism, quoted, captured and communicated through the embroiderer’s technical skill and imaginatively artistic ability.