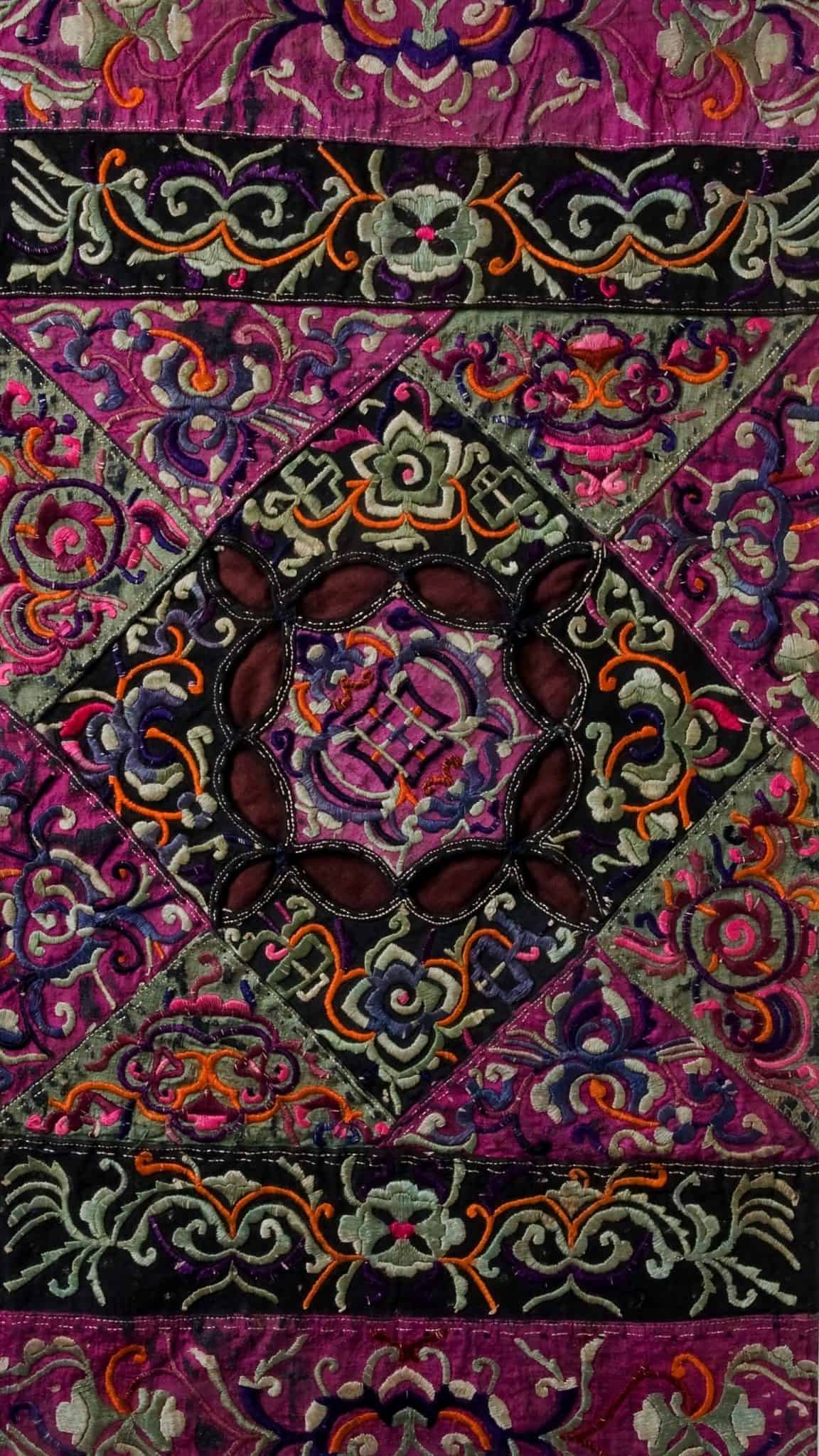 Wenshan Miao were originally located in the southeast of Guizhou but after their uprisings against the Ming dynasty were suppressed by the imperial state and driven further south, where they settled in Wenshan county, Yunnan. Clothing and embroidery styles subsequently were influenced by the Zhuang nationality of Guangxi and Yunnan. The synthesis of Zhuang with Miao has given rise to the distinctive Wenshan Miao embroidery.

This work is a well preserved piece showing very clearly the characteristic blend of Zhuang and Miao. The centre of the work is a freestanding ‘eight-petal flower’ inside a diamond. The top and bottom corners of the diamond are two mirror images of the Butterfly Mother, the revered ancestress of the Miao. The two side corners of the diamond each show a flower flanked by two frogs, derived not from the embroidery traditions of the Miao but those of the Zhuang. Eight triangles, coupled to make four triangles, flank the diamond. The triangles are embroidered with a variety of natural emblems, highly stylized, and heavily influenced by Zhuang. Two bands framing the work on each side portray flower and butterfly groups, in the Miao style.

The technique is the method known as ‘broken-thread flat embroidery’. A single silk thread is split into several very fine filaments, in order to get the narrowest possible gauge. Black, green and pink are the main colours, picked out with blue, indigo and orange. All these colours are traditionally Zhuang.

The design of this work is complex in its component parts, with so many diamonds, triangles and oblong bands, yet achieves great elegance and an overall unity. At first glance, the workmanship seems almost rough, even coarse, however this effect is wholly intentional and in truth the craftsmanship is delicate and deft. The playful evocation of roughness by means of highly refined skill is characteristic of the Wenshan Miao. They pride themselves on their hard work and honesty.

This lovely piece is in a sense a textile history of several hundred years of the southern migration of the Wenshan Miao. Also it is a testament to their adaptability, their veneration of nature, and their belief in living harmoniously and in a neighbourly way with other nationalities, willingly borrowing and lending not only their artistic skills but their spiritual relationship with the world.